Dev Explains How Steam Curator Reviewers May Be Scammers 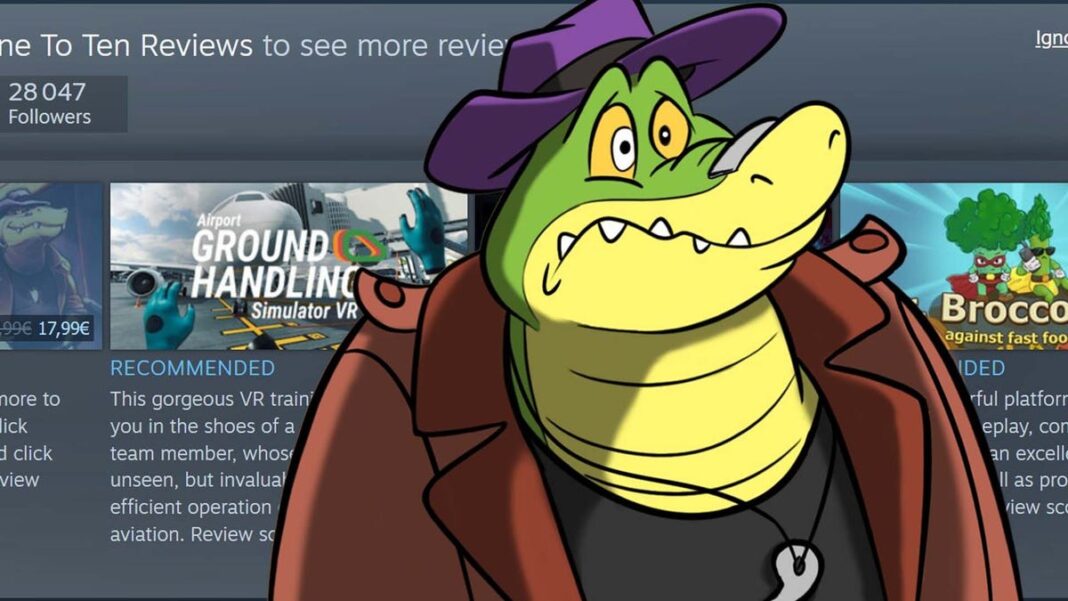 Steam is both an easy-to-use digital game storefront and a rabbit hole of shady shit, filled with weird, archaic leftovers from past ideas Valve never got around to finishing or improving. One such example is the curator system. Most users barely interact with it, but recently an indie developer believes the system is being used by scammers who also sell game codes on gray markets. They claim that because they didn’t provide free codes their latest game was targeted by these supposed grifters on Steam.

Yesterday on Twitter, Cowcat, the developer behind Brok—a newly released point-and-click beat ‘em up starring an alligator—shared a now-viral thread explaining how a particular type of scam involving curators, Steam codes, and reviews works. Steam curator lists are user-made and anyone can create and update them with reviews for new or old games, helping people easily find the next game to purchase. And while technically nothing in the thread is confirmed by the supposed scammers themselves, the evidence is telling and is another example of the types of shit smaller game devs have to deal with when trying to make and sell games in the year 2022. Though, scammers tricking devs and PR into giving up codes isn’t a new phenomenon by any means.

On August 28, just two days after Brok’s release date, Cowcat explained that the game was being targeted by some Steam curators with suspicious negative reviews. While many of these curators had hundreds of positive reviews for various other games, some had released negative curator reviews for Brok.

What makes this more suspicious is that many of these curators only had one negative review and it was their Brok review. Cowcat claims that many of these curators had initially posted positive reviews for Brok. But then something changed. So, what happened? Well, the dev believes that this attempt to filter out scammers by emailing them free codes had angered some people.

Normally, indie dev email inboxes are flooded with people requesting codes, claiming to be reviewers, critics, YouTubers, publishers, etc. As Cowcat mentions in the thread, most of these are scammers looking to get some free codes that can then be sold on shady key-selling sites. But in an effort to not accidentally ignore the few legit critics and reviewers reaching out to play Brok, Cowcat came up with a plan. They sent all these people Steam keys for the free-to-play Brok prologue, which acts as a prequel and demo to the full game. Cowcat figured people who really wanted to play the game for review purposes would use the code, see it was for the free prologue and reach out about the mistake. And while some did indeed contact the dev about the “mistake” most didn’t, which Cowcat believes is because they didn’t want to play it, they instead quickly sold the key via shady key sellers.

This move likely caused these scammers some trouble as people who bought the keys discovered they had been screwed. So Cowcat believes that some of these con artists turned to their curator pages on Steam and reviewed Brok negatively before its release. What makes these reviews very suspect is that Cowcat never gave out the full game to these people, yet their reviews claim to have played the full game.

It should be noted that any curator can review any game on Steam, even if they don’t own it or have never played it, making it even easier for people to use the old, barely updated system for fraud.

Kotaku has reached out to Cowcat and Valve.

After all this, Cowcat says they plan on reporting these Steam curators to Valve. They also further criticized the company for continuing to allow shady Steam curators and scam artists to use positive and negative reviews like this to “blackmail” indie devs. Further, they asked people to not buy games via shady key sites as the devs don’t see a dime from these sales as the codes are often gained via scams like the one Cowcat believes these curators are involved in.

As for how this will affect Brok, Cowcat isn’t worried as they don’t believe these curators lead to many sales on Steam. But they are still glad their thread went viral and is helping spread the word on how these types of scams continue to go unpunished on Steam.