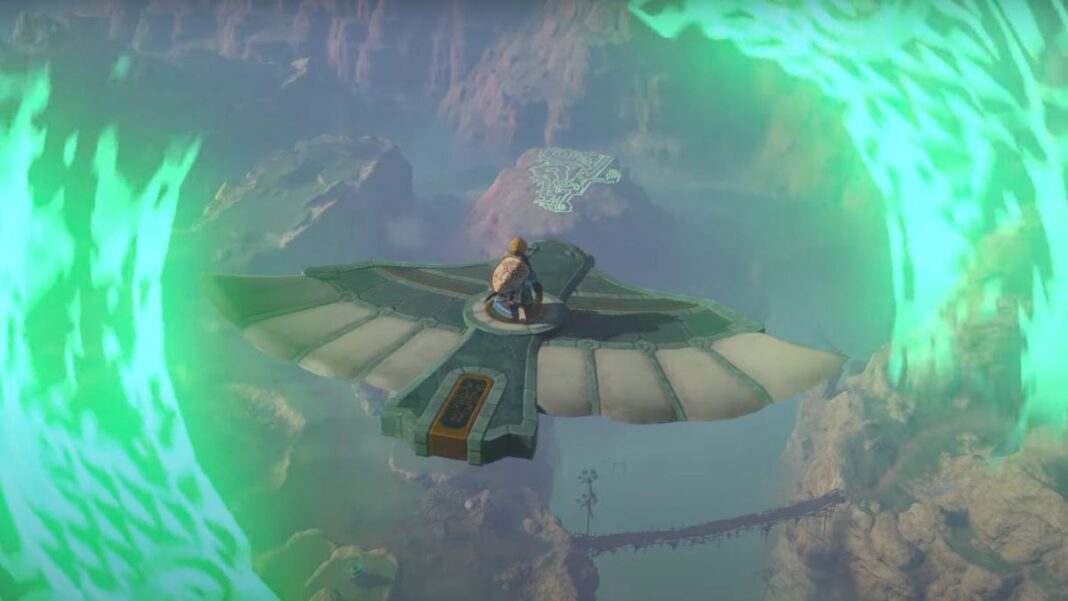 With information on the sequel to The Legend of Zelda: Breath of the Wild as rare as Coccu’s teeth, every snippet or trailer is pored over, torn apart, and minutely inspected by avid fans, like conspiracists decoding the latest Q-drop. Here are some of our favorite fan-theories from yesterday’s new trailer, along with the name reveal, Tears of the Kingdom.

Often, people’s theories of discoveries hidden within the meager details Nintendo release are based on wishful thinking, vivid imagining, or outright silliness. But it’s always fascinating to look over them, hoping to spot the nugget of truth, and the odd few with eagle eyes. Here’s the trailer, absolutely packed with little details, glyphs and other fan-baiting detritus, for you to forensically dissect.

The Legend of Zelda: Tears of the Kingdom – Coming May twelfth, 2023 – Nintendo Switch

My favorites are always the jpgs covered in red circles and lines, which look like they’re going to conclude with proof of a shooter on the grassy knoll. (Imagine your own Charlie in Always Sunny gif here.) Here’s a mighty fine one from Reddit user WhatWasThatHowl, which purports to prove multiple crossovers with Twilight Princess, especially the existence of Twilis and their Twilight Realm.

A lot of people are assuming the title says “Tears” as in crying, but what if it’s “Tears” as in rips in reality? It’s worth knowing that the first Breath of the Wild heavily featured ruins from a prehistoric tribe called the Zonai, though the game never really explained any of it. And in an earlier Tears of the Kingdom trailer, Zelda suggests the timelines are being combined. So, the poster above speculates that since this new trailer is now showing off the same ancient ruins and connecting them to the Twili from Twilight Princess, then it follows that the Zonai are descended from them. Where’s my red string?

Of course, once you start digging into Zelda timelines, a migraine is never far away. We know there are three separate ones extant at this point, each having split from Ocarina of Time; the so-called “Adult Timeline,” “Child Timeline,” and contradiction-restoring “Fallen Hero Timeline.” Or, as I like to put it, “They just started random stories with the same characters, and then tried to retrospectively force it into some kind of sense.” Anyway, none of this matters too much, given that the official The Legend of Zelda: Breath of the Wild – Creating a Champion book states that, according to the Zelda Fandom site, “everything before the Breath of the Wild backstory has faded into myth.”

Reddit user Lentoron managed to find the location of a scene from TofK’s trailer in the original BotW, confirming the game is set at least in part on the same map.

But of course we also know that the sequel will feature a lot of sky-based antics, with floating islands and Link being able to glide about between them, Green Goblin-style.

Isac Morandin on Twitter scoured the background details of the trailer especially carefully, and spotted this strange green swirly-whirly patterns poking up from the ground in various places.

My theory: these will be launch pads, that when stepped into will fling Link up into the air, for him to them paraglide to the new areas above. We in fact saw something similar in 2021’s trailer, where Link turns into a droplet and floats upward (seemingly in reverse?).

You’ve also got a lot of people spotting the new device on Link’s hip:

The most popular theory online is that this is to contain those tears, the kingdom ones. Which would of course rather put the kibosh on that “rip/tears” theory. (Which never worked anyway, since the Japanese title uses 淚, meaning crying tears.) During the trailer you see the same object, but only half-full.

And talking of tears, kudos to IntentStudios on Reddit for this “Oh yeah!” moment:

In more wishful thinking territory are various theories that attempt to match obscure shapes or twisty patterns with just about anything from the history of the franchise. At this point it’s basically a Rorschach test that says more about the poster than the conceit. Here, for instance, is the desperate hope that a barely visible blur (that is most likely one of the platforms Link surfs elsewhere in the trailer) might be one of the scrapped concepts for a Divine Beast from BotW.

Others suggest a dragon, but, y’know, it’s probably just a platform.

Now, this one I’m down for. The ultimate crossover. I’m certain this is right:

And to finish, this isn’t a theory, but it’s too beautiful not to sneak in. Twitter user and pixel artist Kaimatten somehow generated this work of art, based on the game’s cover art, just a few hours later:

Make sure to press play, because as gorgeous as it is still, it’s something else when animated.

We are still also trying to figure out if perhaps we’ll get to play as dry daddy Ganon or if we’ll finally run around as Zelda, but I’m sure you must have your own cockamamy theories to share. Stick ‘em in the comments below.