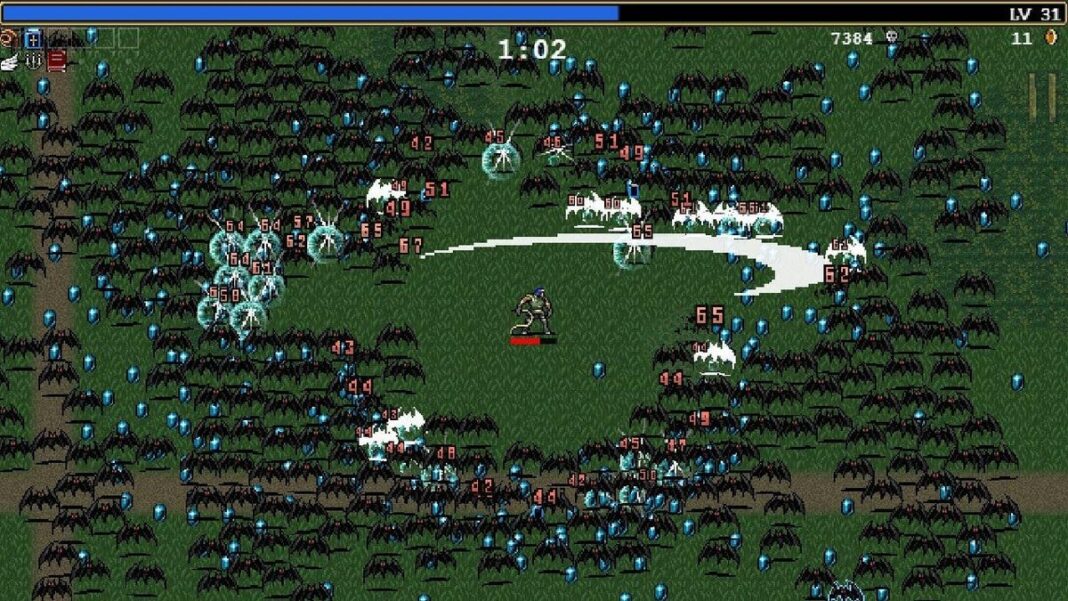 Indie darling roguelite Vampire Survivors, a flaming arrow of pixel monsters and treasure chests, is a little more than a week into its official release, coming out from early access. The game received some tweaks in its final transformation, like balance changes and new achievements. But the casual, pro-goths game is still easy to learn, and perhaps even easier to get lost in.

Now that the full game is out (and is on sale for $4 as part of Steam Scream Fest through November 1), it’s an especially good time to get lost. I talked to Kotaku’s video lead Eric Schulkin, who likes listening to podcasts while playing Vampire Survivors, about his biggest tips and offered some myself, as someone who listens to Lana Del Rey while playing Vampire Survivors. It’s the best of both worlds.

Eric Schulkin: In Vampire Survivors, you kill monsters to level up and earn gold—don’t sit back and play defensively. Be proactive, or you’ll weaken yourself in the long run by being underleveled when the stage’s difficulty cranks up.

The game also has seven hidden and challenge stages, most of which become available after you defeat a main stage’s boss and unleash the game’s speedy Hyper Mode, but I wouldn’t worry too much about them when first starting out. Remember that they’re there, though, and that the game offers a lot to work toward.

Instant Facelift
Think of the Foreo Bear as exercise for your face, engaging muscles to provide radiance and lift with lasting results.

We recommend you boost offensive PowerUps like Might (which improves your damage output), Area (which increases your weapons attack area), or Amount (which releases an additional projectile from your automated weapons). But PowerUps are refundable, so don’t be afraid to experiment and find a combination that works best for you. Eric has some suggestions if you need some inspiration, though.

ES: The PowerUps Growth and Greed earn you more XP and coins respectively for each run. Go for maxing these out first, then Might to raise damage.

From there, it can be personal preference. Amount, Cooldown (which reduces cooldown times), and Magnet (which attracts items to you), are all strong choices. Don’t take Curse until you’re ready to deal with tougher foes.

AB: It escalates everything about enemies: their health, speed, and frequency. Somehow it’s still competition-legal.

As for other items found on runs, either on the ground, in chests, or by collecting dead enemies’ dropped XP gems and earning them as level up prizes…

All good things in time

ES: You don’t have to take something when it’s presented to you—continue to progress in the game and you’ll unlock Skip, which lets you ditch rewards in favor of XP, and Banish, which exiles a reward option for the rest of your run. More is not always more.

AB: You can also find passive items, like Spinach, Crown, and Armor, in treasure chests or in your level up offerings. These can be combined with weapons to create ultra-powerful evolved weapons. Combining Knife with Bracer, for example, creates Thousand Edge—a robust blast of blades.

But don’t hesitate with items to the point where you forget where your useful item has fallen or miss out on an opportunity to deal huge damage to an enemy horde. Be strategic and attuned to your health when you’re surrounded.

And while we’re talking about weapons and strategy…

ES: Build your weapons up tall, not wide. It’s better to focus on leveling up a couple of weapons rather than have a full inventory of low-level weapons. I’m partial to Garlic, the King Bible, and Flask.

AB: I like Garlic, too, for keeping enemies off of you. Magic Wand and its evolved form, Holy Wand, is a nice long-range weapon, a constant spray of painful magic crosses.

AB: I’m bad at Vampire Survivors spatial awareness, and that often gets me killed. Constantly kiting enemy mobs helps with that. When an area is too dense with enemies to pick up XP gems, I like leading my kite in a big circle to clear the area and go back for that cluster of gems.

I’d also recommend playing with a controller—I usually use a mouse out of laziness and get stuck. Do not get stuck.

ES: Unless you’re the mighty secret character Peppino, an actual tree, you should always be on the move. Back yourself into a tight spot, and you might find yourself trapped. Always look for openings in the enemy lines to bust through.

AB: Sometimes that’s impossible, like when evil flowers have decided to play Ring Around the Rosie with you in the Mad Forest. When you have no other choice, cut through quickly, and deal with health consequences later, ideally with that Floor Chicken you cleverly left lying around.

Become one with nature

ES: Use the environment to your advantage—some stages like the Dairy Plant have traps to set for enemies, or natural chokepoints like the staircases in the Gallo Tower.

AB: Dying is a central part of any video game, especially a fiendish roguelite like Vampire Survivors. Focus on building skills slowly, incremental achievements, PowerUps, and level unlocks. There will always be a chance to try again. Enjoy the meditative vampire adventure.

ES: As a roguelite, the beauty of Vampire Survivors is you cannot fuck up. You’re always making progress, and a run can’t last longer than 30 minutes before the reaper comes calling.